Senator Hewitt has played an active role at RLCC, a caucus of the Republican State Leadership Committee (RSLC), and her time spent working with the caucus has provided her with opportunities to meet and engage with elected leaders from across the country.

During her time with RLCC, Sen. Hewitt has also taken part in the Future Majority Project (FMP) and Right Women, Right Now (RWRN) initiatives, which have invested more than $28 million to elect female and candidates of diversity to state level offices in all 50 states. Recently, Sen. Hewitt took the message of the RSLC’s FMP and RWRN initiatives to the New Mexico Rise Summit to encourage the female leaders of tomorrow to advocate in the public arena and run for elected office.

Since beginning her first term in 2016, Sen. Hewitt has emerged as a leader in the push for fiscal reforms to shrink the size of Louisiana’s state government, limit spending, fund programs with measurable results and streamline higher education and healthcare. Additionally, Senator Hewitt created the LaSTEM Advisory Council, which will produce high paying jobs to meet the future workforce demands in science, technology, engineering, and math (STEM) fields.

A former oil and gas industry executive, Sen. Hewitt was elected to the Louisiana Senate in 2015, where she currently serves as vice-chair of the Senate Transportation Committee, as well as a member of the Joint Budget Committee and the Senate Finance Committee, which oversees the state budgeting process.

Sen. Hewitt said she looks forward to serving with the state legislative leaders from 24 states joining her on the committee, adding that she is eager to advance the work of the RLCC and the RSLC as they look toward the 2019 election cycle.

“Over the last several years, the RLCC and the RSLC have worked tirelessly to secure Republican victories in countless races nationwide, and most importantly, they’ve encouraged and empowered hundreds of first time female and minority candidates to serve in state bodies across the U.S,” Hewitt said.  “I am excited to accept this leadership position with the RLCC and will do my best to continue improving on the organization’s impressive record of success.”

RSLC President Matt Walter said Sen. Hewitt embodies the values and initiatives put forth by the organization and added that her leadership skills and professionalism make her a perfect fit for her Executive Committee role and any other position she may seek.

“Like U.S. Senator Joni Ernst, Alabama Governor Kay Ivey, and Iowa Governor Kim Reynolds, state legislators and alumnae of the RSLC like Senator Sharon Hewitt have proven themselves to be the national and statewide leaders of tomorrow,“ Walter said. “Senator Hewitt’s impressive background as a business leader and successful elected official puts her on any short list of contenders for higher office.”

The RSLC is the largest caucus of Republican state leaders in the country and the only national organization whose mission is to elect Republicans to multiple down-ballot, state-level offices. Since 2002, the RSLC has been working to elect candidates to the offices of lieutenant governor, secretary of state, state legislator, the judiciary and other down-ticket races. The RLCC, a caucus of the RSLC, is the only national organization dedicated exclusively to electing more Republicans to state legislatures. The RLCC has assisted in bringing successes to numerous legislative chambers since its formation, winning historic majorities in states nationwide and presently controlling 62 of 99 state legislative chambers following the 2018 election cycle. 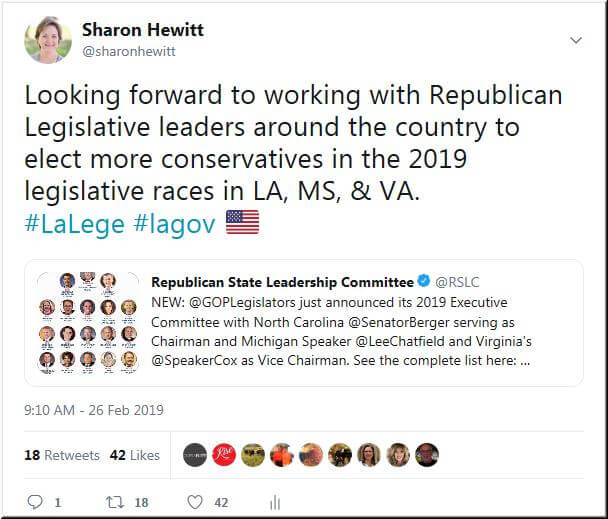