Guests were enthralled by her stories of growing up in a testosterone-filled environment as a newly hired engineer on an offshore oil platform, to her family and community leadership, and to her most important role to date, being a freshman State Senator from Louisiana. 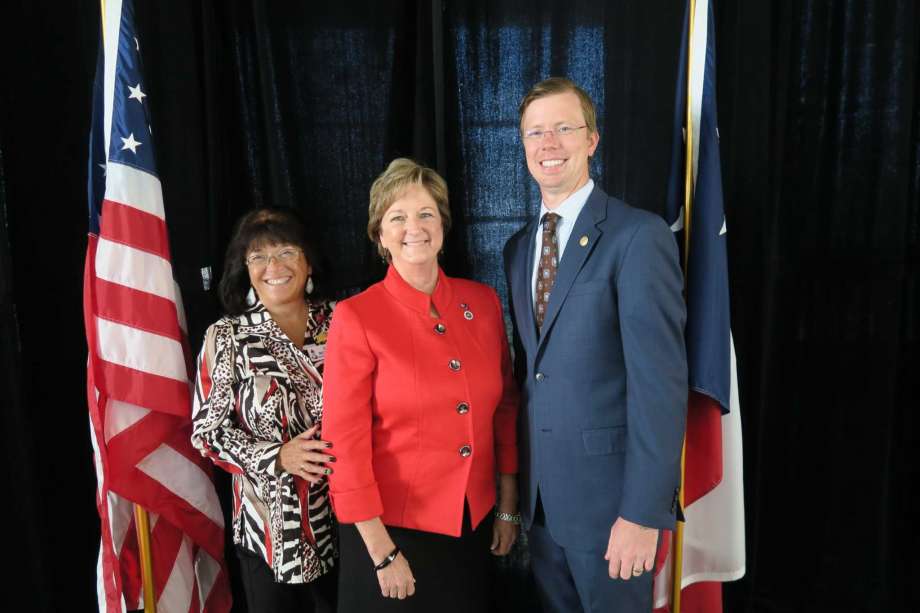 "My whole life I always have felt like I was the girl who insisted on crashing the boys' club," Hewitt said.  As a young girl, Hewitt always envisioned herself following in her mom's footsteps by becoming a teacher.

"During my high school years, I quickly became disillusioned by the teaching profession, after seeing how little money my mom made compared to my dad, who worked in the oil industry, as a drilling manager for over 30 years. I was good at math and science, so I thought why couldn't I have a career just like my dad?" Hewitt recalled.

Hewitt earned a mechanical engineering degree from Louisiana State University and shortly after, began her career working for Shell Oil Company, working offshore, in what was then a very male dominated world.

Just as any other first year Shell engineer had to do, Hewitt spent hers on an offshore oil rig in the Gulf of Mexico, for mandatory on the job training. But you could say she wasn't welcomed as one of the guys.

"I can remember my first day so vividly. After departing from the helicopter which brought us to the rig, I went in search of my supervisor. I recall being so proud to be wearing my coveralls, I had a shiny new Shell hard hat, and was wearing my first pair of steeled-toed boots," she said.

When she finally caught up with her supervisor that day, he uttered words to her that she will never forget.

"He started with saying that there are two main problems with the oil business, 'number one being O-rings, [which tightly fashion things like a hose nozzle to stop leaks], and the second problem is women,'" Hewitt recounts.

Hewitt wasn't going to let the words of her supervisor alter her perception of the oil industry. She was excited about the opportunities and ready to overcome any obstacles to earn her stripes with her peers and prove that she could make a difference as a woman in a man's world.

There were many challenges Hewitt faced that first year, but probably none more challenging than the task of finding out how to use the bathroom accommodations to her advantage.

"There was only one men's restroom - more like one large men's locker-room, with open shower heads along one wall and urinals along the other. For safety reasons, neither door to the restroom locked. After a week of not showering, I realized this engineer needed to put her thinking cap on and come up with a solution," Hewitt said.

So, after a week off from the rig, thinking of her master plan, Hewitt returned with a 40-foot rope in tow. She explained how once the locker-room was empty, she tied the rope around the knobs of the two doors inside the men's locker-room, so she could have a little privacy on the offshore drilling rig she worked on with all men. A good engineer always has a backup plan, so Hewitt always showered in a bathing suit that first year.

After a few years of working for Shell, Hewitt became engaged to her husband, Stan, and shortly after, welcomed two young sons to their family. As the boys grew older and Hewitt's responsibilities at Shell Oil grew, she began to realize her job was beginning to take a toll on her young family at the time.

"At the height of my career with Shell, I oversaw a large portion of Shell's Deepwater Operations, managing a quarter of a billion-dollar budget and overseeing 160 employees. It was a job that many aspired to have, and one that very few women had attained," Hewitt said.

Though it was a difficult choice, she never regrets the day she traded in her steeled-toed boots for tennis shoes and began the next chapter in her life as a full-time wife and mother.

"I believed that helping my kids meant being more hands on at home and in the classroom. My years of well-honed engineer management made me up for my first task of building a state of the art playground at my sons' school," Hewitt said.

Over the years, Hewitt has been an advocate for STEM programs, emphasizing technology and rigorous curriculum in the public school system. Her volunteer work earned her the National PTA Life Achievement Award for her leadership.

After both her boys graduated high school and went off to college, she broadened her interest from the schools to her community, volunteering for the East St. Tammany Habitat for Humanity and Junior Auxiliary of Slidell.

"Helping others in need has been so fulfilling to me. I'm happiest when I feel like I am making a difference," Hewitt said.

Once both of her boys graduated from college and were happily employed, Hewitt and her husband were true empty nesters. She wondered what God had in store for her during this next chapter in her life. One Sunday in church, the message was about responding to God's calling.

"That lesson really spoke to me. As the minister began his sermon by reading the day's scriptures, line by line he spoke the gospel to the entire congregation until he looked right at me as if there was not another person in the church. He began, 'you have to use your gifts to do God's work, whether it's on the National, State or Local level.' When he said it that way, I knew that I had my answer," Hewitt said.

Hewitt felt a real calling to make a difference. She had already problem solved solutions in her own community, but now she felt like her state was calling.

"A lot of people in the beginning on my campaign were asking, 'why not start more local, like running for Mayor.' I never wavered in my decision to run for the state senate, because let's be honest, I am not a spring chicken and I felt like the time was now or never to jump in and make a difference for my state of Louisiana," she said.

Now, a year into her job of being a State Senator for Louisiana, Hewitt had to start at the bottom of the totem pole again, and earn her stripes, this time in the Louisiana Legislature. And as if her life wouldn't have it any other way, she again, is in a male dominated world, being only one of five women of the 39 elected state senators from Louisiana.

"I gained tremendous experience my first year on the Senate Finance Committee, which oversees the state budgeting process. I got my first taste of how state government works and with my business perspective, I believe I have great ideas on how we can do it better in Louisiana," Hewitt said.

Hewitt went on to say that the Texas Legislature is a great role model. And as Louisiana and Texas are neighboring states and both are big shareholders in the oil and gas industry, she makes it clear that Texas, although a competitor, is a state that Louisiana should have great respect for. She believes her fellow peers in the Louisiana legislature should admire how Texas balances its budget, noting that Louisiana is facing its biggest budget deficit in its history.

"I was fascinated about her story and about how she got started, and what her first day on the job was like. Her stories echo inspiration, because here we have a woman who has been extremely successful in what might be considered a man's world. She felt the call to do something in her state, she saw how things are going and thought, what am I going to do next? She answered the call. When you think about a woman like Senator Hewitt, speaking to a group with political orientation, but it's also a women's group, she is very inspiring," Martin said.

Whether she's working as an engineer, being a wife and mother, a civic leader, or State Senator, one thing has always been clear, it's never been about personal enrichment for Hewitt, it's about public service.

"Both in business and in the community, I've learned that by identifying problems and working with the stakeholders to develop solutions, great things can be accomplished," Hewitt concluded.