Recently, Hewitt took the message of the RSLC’s FMP and RWRN initiatives to the New Mexico Rise Summit to encourage the female leaders of tomorrow to advocate in the public arena and run for elected office. 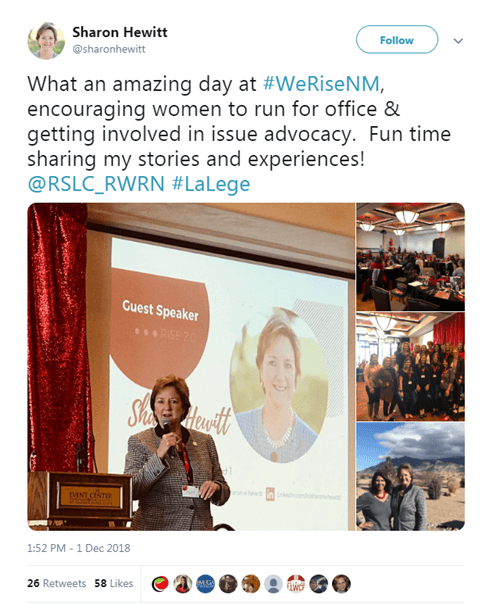 “Like U.S. Senator Joni Ernst, Alabama Governor Kay Ivey, and Iowa Governor Kim Reynolds, state legislators and alumnae of the RSLC like Senator Sharon Hewitt have proven themselves to be the national and statewide leaders of tomorrow,“

“Senator Hewitt’s impressive background as a business leader and successful elected official puts her on any short list of contenders for higher office,” added Walter.

Since 2012, the RSLC’s Right Women, Right Now and Future Majority Project Initiatives have invested over $28 million to elect female and candidates of diversity to state level office in all fifty states.  For more information on these initiates, please visit www.RSLC.GOP.

The Republican State Leadership Committee (RSLC) is the largest caucus of Republican state leaders in the country and the only national organization whose mission is to elect Republicans to multiple down-ballot, state-level offices. Since 2002, the RSLC has been working to elect candidates to the offices of lieutenant governor, secretary of state, state legislator, the judiciary and other down-ticket races. State-level Republicans maintain 62 of 99 legislative chamber majorities in red, purple and blue states, hold 25 lieutenant governor seats, and control 27 secretaries of state offices. To learn more about the RSLC, please visit www.RSLC.GOP or follow @RSLC on Twitter.